Early Twentieth-Century Forms of Improvisation in the Oeuvres of Erwin Schulhoff, Darius Milhaud and Otto Luening 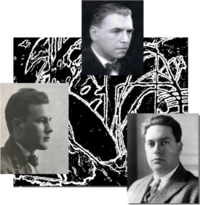 Studies on improvisation in art music contexts between 1900 and 1950 are currently facing a paradox. On the one hand, scholars of the history of Western music contend that improvisation had become irrelevant in “serious” music after 1840 and only re-emerged after 1950, albeit in forms unrelated to any of its earlier variants. On the other hand, various biographical and historical studies hint at forms of improvisation in the oeuvres of famous and less well-known “classical” musicians (i.e. composers, performing-composers) of the first half of the twentieth century.

Framed by a methodology that associates conventional musicological tools with a constructivist approach to knowledge, as well as with notions derived from Niklas Luhmann’s systems theory, I question in my dissertation the prevailing consensus in musicology about the absence of improvisation in musical modernism of the first decades of the twentieth century.

Having defined the science of art music (Musikwissenschaft als Kunstwissenschaft) as a brand of musicology that was initiated by Hugo Riemann and Wolfgang Arthur Cohn in the first decades of the twentieth century, and whose leading figure was Carl Dahlhaus in the latter part of the century, I also observe how contrary to its post-1950 variant, the early twentieth-century discourse on the idea of the musical work (as formulated in the science of art music) did not necessarily discard all forms of improvisation from the musical work of art concept.

Lastly, I analyse four forms of improvisation in six musical examples taken from the oeuvres of Erwin Schulhoff, Darius Milhaud, and Otto Luening. These examples consist of Schulhoff’s Zehn Klavierstücke (1919), his Optimistische Komposition (1936), and his recording of Sami Dva (1933), Milhaud’s L’Homme et son Désir (1918) and his Cocktail aux Clarinettes (1920), and Luening’s Trio for Flute, Violin, and Soprano (1923/24) and his Music for Sister Beatrice (1926).

The four forms of improvisation that can be observed in my musical case studies are:

(1) Improvisation as a means of ‘live’ performance.

(2) Improvisation as a means of composition.

(3) Compositions which explicitly frame and project themselves as a means of generating in performance ever-changing forms.

(4) Conveyed or mediated improvisation (i.e. works that rely on artistic (artificial) means and performative elements to create the illusion of a form of improvisation).

These categories are not necessarily mutually exclusive and are mostly derived from Carl Dahlhaus’s distinction between the musical artwork as a classical-romantic category and ‘archaic’ or ‘regressive’ modes of music-making.

The project, funded by the Schweizerische nationalfonds, is a collaboration between the Musikwissenschafltiches Seminar der Universität Basel and the Hochschule für Musik Basel. The final documents should serve as an initial step towards filling the existing gap in musicology and provide an in-depth study of the interplay between concepts of improvisation and art music of the first half of the twentieth century. 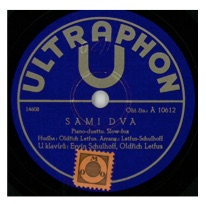 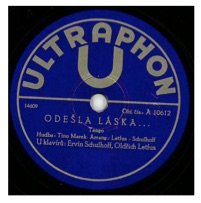 Sami Dva and Odešla láska are two undated recordings (probably around 1933) of Erwin Schulhoff-Oldřich Letfus duo that I unearthed from the archives of Prague Radio in July 2014. They are unique testimonies of their "jazz" oriented performances which were also regularly broadcast live on Radio between 1931–1935.

The record is an Ultraphone 78 rpm disc with Sami Dva by Oldřich Letfus, labelled as a slow-fox, on one side and a tango entitled Odešla láska by Tino Marek on the other. For more information about these recordings see my article "Neue Sachlichkeit and Schulhoff's improvisations" (2015).

The original 78 rpm Ultraphon record of the Erwin Schulhoff-Oldřich Letfus piano duo is housed in the archives of Prague Radio who kindly provided the sound files and the pictures.